Academic Calendar: between myth and legend

In recent months, a proposal to reform the academic calendar has been at the center of discussion among teachers and student representatives.

Before giving you our point of view, it is absolutely necessary to make some clarity on what, to date, is actually under discussion and correct some incorrect or incomplete information that has been distributed by others.

So let's start with a very specific question: "What is a (this) reform of the academic calendar?"
The academic calendar is the tool with which universities develop the temporal organization of activities,educational and non-educational. A reform therefore provides for the general reorganization of the lesson/exam/holiday periods based on the needs of students and teachers, as well as obviously on celebrations and events of national scope.
It is therefore NOT the subject of this proposal anything that has to do with the number of exam or degree exams, nor with the hours of class.
Specifically, this reform provides:

So let's move on to another frequent question: " Has this change already been approved? If not, when will it be approved?"

Absolutely NOT! The dean of the School of Industrial and Information Engineering presented this proposal to the students only last week.
The official approval will take place with the convocation of the Academic Senate in February or March and before then the new rector has already planned a series of meetings with student representatives and teachers to listen to suggestions and changes.

Finally, the most important question: "Can this reform be modified before final approval?"

**Of course!It is indeed our duty, at this stage, to gather as many opinions as possible to ensure that this change is first of all for the benefit of the students.
In this regard, we representatives of Svoltastudenti are enthusiastic about the principle that drove this renewal: for years we have been pointing out the inconveniences that students in exchange with foreign countries suffer due to our calendar, completely disconnected from the rest of the world. The new configuration of the semesters would finally be standardized to those of the main European universities in the fields of Engineering, Architecture and Design (such as DCU, TU Delft, ETH, U. Port, …).

Obviously the proposal is far from perfect, it is unthinkable in fact to eliminate the break for the tests in itinere given the improvement they have brought in passing the exams (just see the statistics between before they were introduced and after).
For this reason we suggest a small correction to the calendar that consists in anticipating everything by a week, starting the exam session on the last days of August and ending with the third week of July, thus also making the July session of 6 weeks and recovering the weeks of suspension. 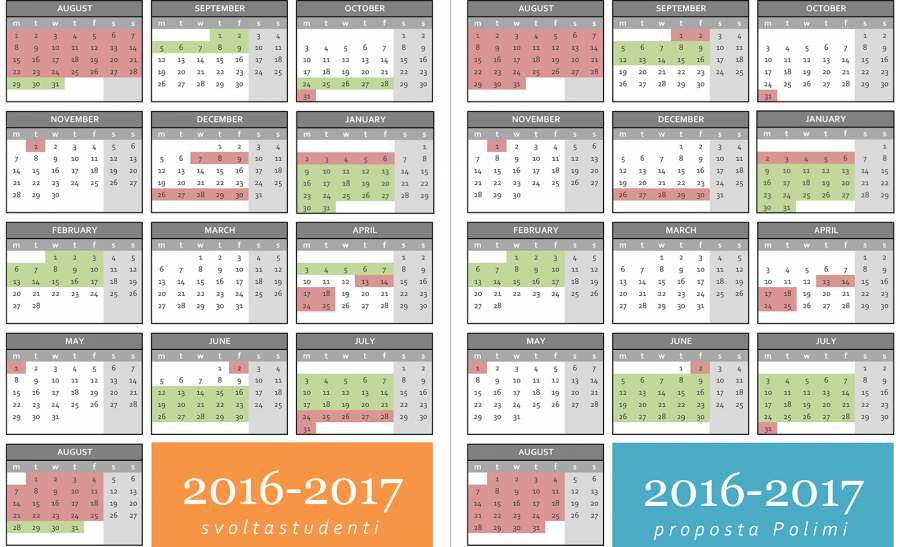 Academic Calendar: On the left our correction. On the right the original proposal. In red the days of vacation, in green the days of examination and in white the days of lessons.

This is what we have worked so far;** we are working so that we do not reason only on principles and ideals but we bring to the table something concrete that can really improve the quality of life of students **.

However, the debate is still very open and indeed we look forward to your opinion! Tell us what your ideal calendar should have, writing to us info@svoltastudenti.it or posting your idea on Twitter and Facebook with hashtags #svoltalab, on January 10th we will collect your ideas and present them to the teachers and the Rector!